This collection contains six images from the volume published by Count A. S. Uvarov under the title Collection of maps and drawings for the study of the antiquities of Southern Russia and the Shores of the Black Sea.

In part, this was the illustrated companion to Uvarov's Recherches sur les antiquités de la Russie méridionale et des côtes de la mer Noire - the written result of the expedition commissioned in 1847. Uvarov's charge came from Maximilian, Duke of Leuchtenberg, President of the Imperial Academy of Arts and of the newly-established (1846) Imperial Archaeological Society. He was to conduct research at any and all sites "mentioned by the ancient writers" from the mouth of the Danube to the mouth of the Phasis (Rioni) in Georgia, and to pay attention to the disposition of burial mounds throughout the region.

Points 4 though 10 of the expedition instruction are an excellent thumbnail sketch of the significance of the Black Sea littoral from the vantage point of mid-19th century archaeologists (and their patrons):

4. To determine the elevation of ancient places for which there are no good plans;
5. To study the remains and ruins to be found in the Crimean interior, notably along the Salgir, Belbek, and Mangush rivers;
6. Apart from antiquities of the classical period, to make inquiries into the antiquities of all time periods, including those of the Scythians, Byzantines, Tatars, Genoese, and Russians;
7. To collect all the ancient inscriptions, known or unknown, making copies or imprints of them;
8. To verify [Paul] DuBrux's claims about Nymphaea (Kara Bouroum);
9. To visit the museums at Nikolaief, Theodosie, and Odessa, and the antiquities found at the church at Taman;
10. Sepulchres of several Scythian kings are said to exist along the north coast of the Putrid Sea: to see whether these claims have any foundation...

Uvarov did not fulfill the instruction. At least, not in print. His Recherches, published in 1855, opens with allusions to extenuating circumstances but also to his decision to exercise discretion, before going on to describe the course of the Dnepr from the famous rapids to Nicopolis (chapter 1), and Olbia and the mouth of the Bug River (chapter 2). Uvarov spent a good deal of time on excavations in Tavrida province in 1853-1854, but the geogrpahical spread of the maps and views included in the volume of illustrations, which was published four years earlier, suggests that Uvarov had in fact made his way through the entire littoral as it was mapped out for him in the expedition instruction.

Perhaps, when it came down to it, he simply preferred digging to writing.

Credit for the production of the illustrations goes not to Uvarov, but to the artist who travelled with him, M. Vebel'. The lithography is by François Joseph Dupressoir. V. Darleng printed the images. 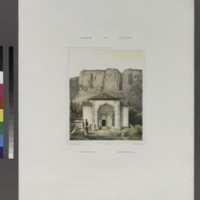 Chromolithograph of the mausoleum of the founder of the Giray dynasty and his successor, Mengli Giray (d.1515), who commissioned the building.Examine the image in more detail here.

View of the Nave in the Cave Church 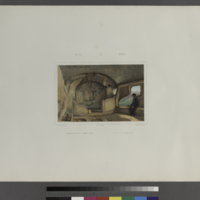 Chromolithograph of a "cave church" at Mangup. Churches and monasteries were often built into the sides of cliffs in the Crimean mountains.

Interior View of the Lower Church 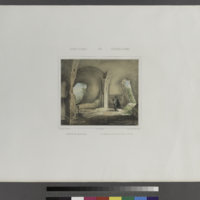 Chromolithograph. The French title of this lithograph ("view of the church at the foot of the mountain") makes no reference to the fact that this is, according to the Russian-language title, an interior view of the lower church. In Crimea, the most…

Ruins of the Khan's Crypt 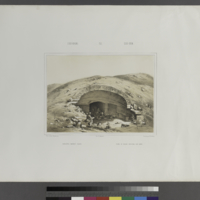 Chromolithograph of a crypt of an unknown khan. French title: "Ruins of the sepulchral cave of the khans".

Ruins of the Mosque of Sultan Baybars 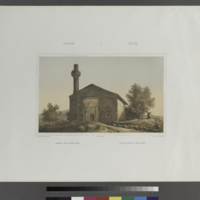 Chromolithograph of a mosque built by Sultan Baybars (d. 1277) of Egypt. Baybars, one of the great Mamluk sultans, was likely a Kipchak Turk born in the Pontic steppe. He maintained close diplomatic ties with the Kipchak Khanate (also known as the…