From the 1830s onward Crimea was a favored venue for prominent displays of wealth by powerful members of the ruling elite generally associated with the gulf-side imperial capital far away to the north. Rather than recreate the architecture of St. Petersburg on the Black Sea, many of those well-connected and well-to-do landowners made a conscious effort to accentuate the foreignness – perhaps even the exotic nature – of Crimea in the architecture of their estates and palaces.

For some, the distinctiveness of the landscape was rooted in its Greek legacy. Russians and foreigners alike, inspired by the classical revival in architecture sweeping across Europe, pointed excitedly to the tangible residue of this legacy which suddenly placed Tavrida on the intellectual and cultural map of western civilization. Grecian elements therefore dominated many early nineteenth-century buildings.

Other landowners – particularly the most wealthy and well-connected – played up the more exotic “Asiatic” legacy of Tavrida in their domestic landscapes. These nobles found it not just aesthetically pleasing but also empowering to incorporate elements of the local architectural tradition and natural landscape. In this they were no different than imperial elites elsewhere.

In Russia, private residences were of particular importance to the articulation of the imperial presence in the borderland precisely because they were anything but private. Country houses and palaces were essentially public spaces, meant to attract the gaze of peers and peasants alike. The dignitaries, travelers and other visitors who penned detailed descriptions of Alupka, Gaspra, and Gurzuf inscribed these structures into the symbolic landscape of the province, but even on their own, the usad’by served as daily reminders of the reality of imperial authority to those who inhabited neighboring villages and worked in estate orchards and vineyards.

Of course, not all landowners were wealthy enough to build palaces or manor houses that could accommodate such lavish public spectacles. The majority of those who did command that level of wealth were not provincial nobles, but members of the ruling elite who owned estates but neither registered in the Tavrida noble register nor otherwise participated in daily life in the province.

The bulk of Tavrida’s registered nobles were not part of the ruling elite, nor were they distinguished for their wealth. In 1789 Governor Zhegulin pointed out to Potemkin that many of the (non-Tatar) officials in Tavrida were quite small-time Little Russian nobles or Polish szlachta who owned between five and thirty-five serfs. The low population density of the province together with the freedom of the native population from serfdom prevented landowners from accumulating wealth in the form of souls until well into the nineteenth century.

However, most nobles (96% of non-Tatars and 88% of mirzas) in 1815 for example did own land from which they presumably drew sufficient income to maintain an honorable lifestyle. Of the 225 nobles registered between 1830 and 1853 for whom I have property data, 65% owned either arable or pasture land, and another 12% owned land in the form of orchards, gardens or vineyards. The remaining 23% owned houses and/or household servants and peasants, but did not mention landholding in their entries. Among ennobled mirzas, 96% owned land of some kind. Interestingly enough, they enjoyed average holdings three times larger than those of others, and a number of mirzas accumulated (or maintained) considerable annual incomes.


View of the Imperial Palace of Orianda in Crimea 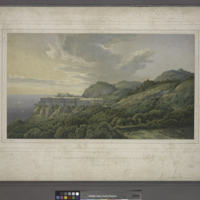 Chromolithograph of the "Palace of Orianda" designed by Karl Friedrich Schinkel (1781 – 1841).

This was the first major European-style house built on the southern coast. It belonged to the military governor of New Russia, Armand Emmanuel du Plessy, duc de Richelieu. Richelieu acquired the 380-acre property at Gurzuf for 4,000 rubles in 1808…

Lieutenant-General A. M. Borozdin, governor of Tavrida 1807-1816, built what was widely considered to be a lovely two-storey house at Küçük Lampat near Alushta.

Count Vorontsov’s mother-in-law, A. V. Branitskaia, purchased Massandra from Sof’ia Pototskaia and placed it in her son-in-law’s control until her grandson, for whom she intended the estate, reached maturity.

Largely by virtue of its productive…

Vorontsov acquired the land around Alupka piecemeal from 226 Tatar inhabitants between 1823 and 1825. He spent the equivalent of over 37,000 silver rubles in the process. Vorontsov developed the estate between 1828 and 1848 with revenues from the…

Lev Aleksandrovich Naryshkin, a general and wealthy cousin of Mikhail Vorontsov, built the estate of Miskhor in the 1830s, gracing it with a park of cypress and cedars and a house known as “Little Alupka” in a nod to his kinsman. Naryshkin acquired…

Prince Kirill Aleksandrovich Naryshkin, another of Vorontsov’s cousins and a member of the State Council, built the now famous estate at Foros.

Gaspra had been an ancient Greek settlement and a Tatar village. Prince A. N. Golitsyn built the palace between 1831 and 1836 in the neo-Gothic style favored by Vorontsov.

Koreiz, one of the oldest settlements in Crimea, was a lively spot with several shops, eating-houses and mosques; during Princess Anna Sergeevna Golitsyna’s tenure, it was also a center of missionary activity.

Owned by General N. N. Raevksii, hero of the battle of Borodino. Located near Foros.

Founded by Nikolai Demidov; inherited by his sons, Pavel and Anatolii.

Major Revelioti acquired Livadiia from his predecessor in the battalion, Colonel Lambros Katsionis, and sold it to Lev Severinovich Pototskii in 1834. The estate flourished under the stewardship of yet another member of the Vorontsov network. (Among…

Major-General Sergei Ivanovich Mal’tsov included minarets in the design of this two-storey palace. As if the minarets were not curiosity enough, Mal'tsov built the palace of crystal.

Catherine II ennobled the Mal’tsovs, a merchant family, in 1775.…

Kattı Giray’s estate at Demirdzhi of roughly 1,000 desiatinas included a manor house. He also owned “a beautiful seaside villa” and vineyard near Artek.

View items in the Estates Collection